At this time of year, if I have a client come into clinic with aches and feeling generally unwell – they usually think it’s a bout of the summer ‘flu, and often they’re right.  But if someone’s suffering with aching joints, feverishness, fatigue, nausea, maybe odd tingling or numb sensations – and especially if they’ve been out and about walking in long grass or woodland – I always stop to consider whether there’s a chance they’re suffering with Lyme Disease.

Ticks vary in size and colour

Lyme Disease is a bacterial infection spread through tick bites.  If you own a dog (or a horse), it’s likely you’ve come across ticks; tiny, spider-like insects that attach themselves to a host animal (or human) to feed on blood. They can be removed fairly easily with a little tool, and the bite is not usually harmful – unless the tick is carrying Lyme Disease.

Symptoms occur within anything up to about 30 days after infection, and often makes people feel a bit flu-like.  About half of infected people notice a rash which develops around the site of the bite; it’s a red, ring-like rash that spreads outwards from the bite.  Occasionally there are nerve symptoms, such as tingling or numbness, or a one-sided facial paralysis (known as Bell’s Palsy) – this seems to happen more commonly in children.

Lyme Disease is treated fairly readily with antibiotics if it’s caught early enough – within about two months.  Unfortunately, the early signs are often misinterpreted, and if it’s left untreated, the disease can spread to affect nerves, joints, eyes, and heart.  Some people have been known to suffer with chronic symptoms similar to fibromyalgia or chronic fatigue syndrome. 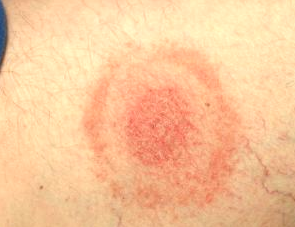 Ticks live in grassland or woodland undergrowth, and feed on wildlife such as deer, hedgehogs, and rabbits.  The best way to prevent a tick bite is to stay covered up – wear long trousers if you’re out walking.  Insect repellent can also be helpful.  If you do find a tick on you, remove it using a special tool called a “Tick Twister” (you can often buy these in a vet’s) or loop a piece of cotton under the tick, as close as possible to your skin, before pulling the tick up and out – don’t use tweezers, as squashing the tick risks injecting yourself with its body fluids. Then disinfect the bite.

If you’re concerned that you may have Lyme Disease, even if you don’t have the tell-tale rash, speak to your GP about a blood test.

ShareTweetGooglePinterestLinkedin
Posted in General
← Anyone for tennis (elbow)?World Arthritis Day →